Arrived Portland dock, boarded ship and coincidently assigned same bunk as last year.  Made new friends immediately, this time with people with various disabilities from all walks of life. Four wheelchair users, several vision impaired and a host of other people who joined to experience life on a tall ship.  There seemed to be quite a few doctors and physiotherapists.  I thought I was the experienced one as this was my second trip but to my surprise several on board were serial tall ship sailors … 22nd, 18th, 10th, “… oh this is my 7th trip”… and so on.  Quite a number on board were Irish and from Cork.  No surprise really.

We were assigned our watch timetables and our weather gear.  Last year I got away with mess duty- this time I was down for an early start in kitchen on Day 2.  After the formalities of meeting the permanent crew we set off motor sailing that evening.

We continued motor sailing on Day 2 down the English coast towards Falmouth.  A very active day as I was setting tables at 7am, pulling ropes by 9am and myself and Eimear were on watch 12 to 4pm.  The weather was good and as we approached Falmouth to anchor the excitement ensued. A requirement on watch is to report fishing gear and anything else in the water. A yacht was motoring fast towards the harbour off our port side.  Captain figured it had to slow down or it would collide with us – the bigger boat by far.  He sounded the siren but yacht ignored and motored on.  We had to slow down and the yacht passed our bow.   CLOSE, VERY CLOSE!  At this point we could see name on yacht and captain radioed him several times.  Eventually he answered and after a verbal row and eventual chastisement by our captain an apology was heard over the radio.  All of us speculated on board as to the madness of the yachtsman and a few theories were presented from drug smuggler to nutcase who stole/borrowed yacht.

We anchored, had tea and settled in the bar for discussion on events so far.

A beautiful day with sunshine and very little wind. We set off towards the Lizard Point off Cornwall. A lot of shipping in the area and in particular huge cruise ships.  After a couple of hours enjoying the sun and chat on deck it was time to get the sails moving again.  The ship had to set a course north east towards Wales before turning South West to Cork so we were very busy that afternoon.  It was slow going all through the night.

Early morning watch was followed by breakfast and just as we were about to relax the first mate announced over the Tannoy it was happy hour – as in hose the ship and clean everywhere above and below deck.  After scrubbing the ship clean and finishing evening meal, most retired to the bar where someone had found a quiz book and announced a table quiz as the evening’s entertainment.  This was great and bonded the group even more so as some of the permanent crew joined in.  There was also a bit if slagging at the Munster guys on board when the news of a Leinster win came through.  Again the ship motor sailed through the night with only a slight wind.

The captain announced we were going to sail again through the night in order that we could reach Cork the next afternoon.  So the day was busy with most of us required to get to the ropes on several occasions.  The Irish flag had been raised the previous night as we entered Irish waters. Some of the crew spotted a small whale coming up for air near the ship.  Unfortunately most of us were below deck at the time.

After tea all hands were on deck to hand the sails.  Hard work but worth it to see the ship at its best as the sun went down.  Curious dolphins popped above the waves but most of us were on the ropes and a fleeting glance was all we could afford them at the time.  We were the 8 to 12 midnight watch and the beautiful sunset did not disappoint.  Next came the full moon and the sky illuminated.
We look at this on land so often but at sea it was magical.  Hats off to all those ancient mariners!

The weather was glorious and we had some wind.  We spotted the Irish coastline around Ballycotton that morning.  Everyone was looking forward to getting on dry land and going out that night.  As we approached the entrance into Cork harbour near Ringaskiddy, the Irish Navy on the Samuel Beckett were training nearby.  Two ribs full of navy personnel came out and circled us giving a great cheer.  Cobh looked beautiful as we approached Cork port.  There still had to be a lot of work done before we docked and anchored beside the R and H Hall building.  That evening most of us ate in the Oyster restaurant beside the English Market followed by a stroll and a couple of pints in the Oliver Plunkett pub.  Most people were back on board by 10pm for a night sleep after the day exertions.  Myself and Eimear were unfortunately on harbour watch from 2 to 4am so we didn’t get much shut eye .

All were up a 7am to clear and clean bunks.  At 10am left the ship as we had found it the previous week; only we had gained new friends and had a great week sailing on board a tall ship.  What an experience.  I will never tire of this.  It is something that all of us should try.  Great benefits arise from it: confidence, new friends, team bonding, inclusion, hard work, social experience and learning to sail! 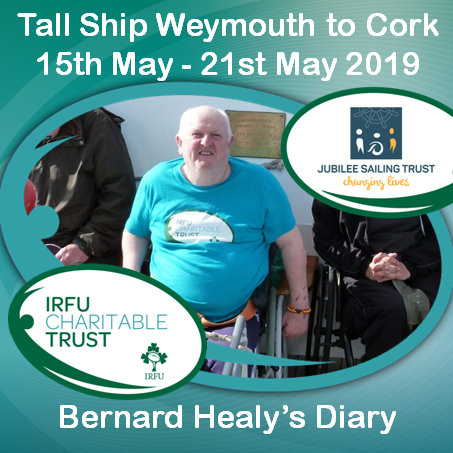 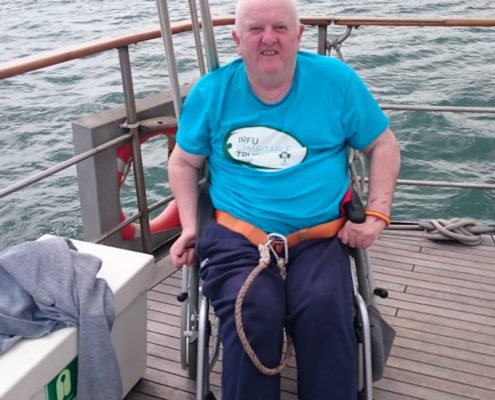 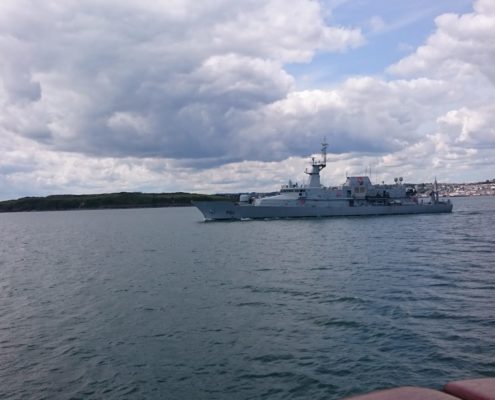 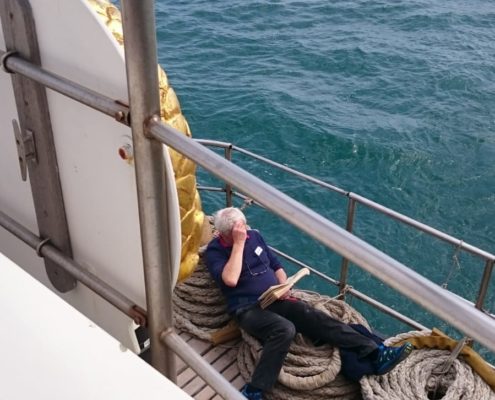 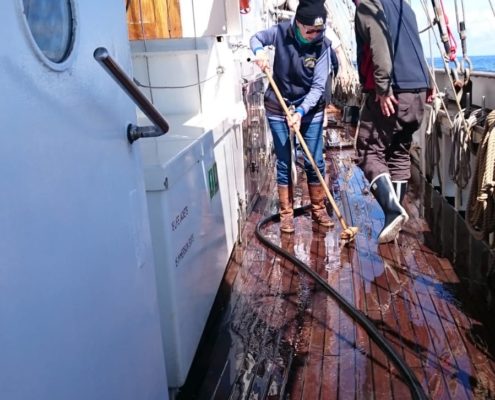 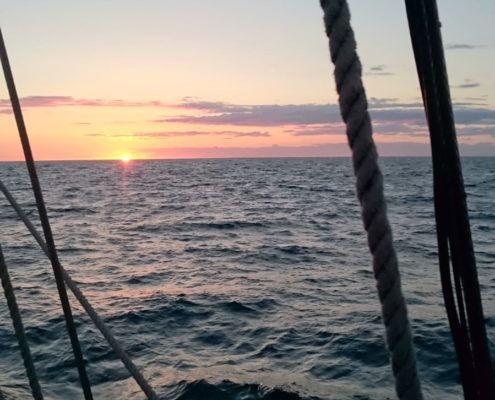 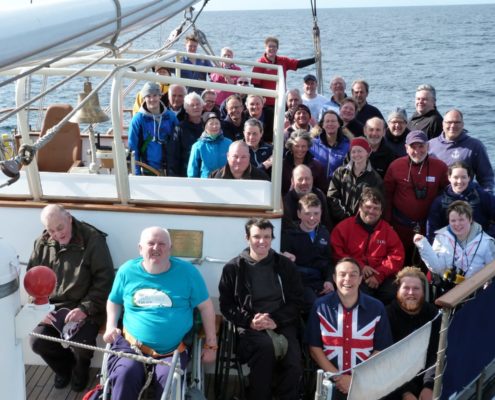