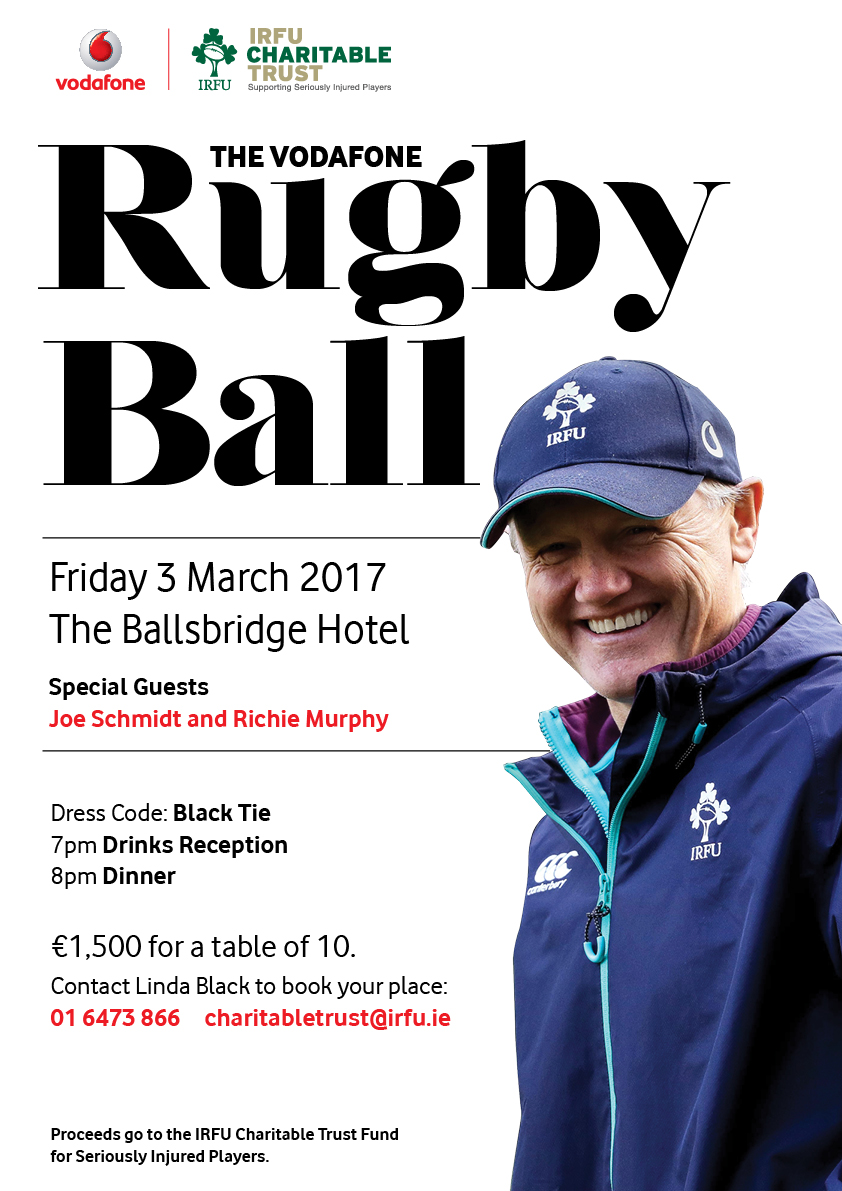 The Annual I.R.F.U. Charitable Trust Ball was held on the 3rd March 17 at the Ballsbridge Hotel, Dublin.   The IRFU Charitable Trust is delighted to have Vodafone as title sponsor for this their biggest fundraiser of the year.  The very successful charity event was a gathering of over 450 people from the worlds of rugby, entertainment and business. Many prominent figures were in attendance including Luke Fitzgerald and Ronnie Delaney.

The evening was organised by Mick Quinn and supported by his Committee.  John Callaghan, Chairman of the Charitable Trust, gave an empassioned overview of the work of the trust in supporting seriously injured players and the bravery of the injured players.  A significant amount of money was raised on the night and this will go a long way in supporting the 33 seriously injured Rugby players.

On arrival guests were treated to a drinks reception sponsored by Diageo. There was entertainment by two Magicians before the delicious meal of Fillet Beef Steak followed by Chocolate Amaretti Tart.  A photo booth was available for people to take fun photos to keep as a memento of the evening.  Luke Fitzgerald got the guests in good spirits as he hosted a Heads and Tails game with the audience, the lucky winner was delighted to receive a deluxe hamper.  Ollie Campbell made a presentation to Ronnie Delaney recognising his great achievement of Olympic Gold and many more titles.

Joe Schmidt and Richie Murphy were honoured with awards  and enjoyed a Q & A with Mick Quinn.  Alan Shortt, comedian, had guests thoroughly entertained with his banter with guests.

The main fundraising was sourced through an auction, silent auction and raffle. The auction lots included coaching sessions with Jonathan Sexton, Garry Ringrose and Robbie Henshaw accompanied by signed rugby jerseys and fantastic trips to New York and Dubai and many more.

After dinner the guests hit the dance floor to the superb band the Juke Box Kings late into the night.  All agreed it was a fantastic event, it was both a memorable and enjoyable evening for a most worthy cause and people have already put the date in their diaries for next year.