Taking place the night before the England v Ireland Six Nations game, this special charity match kicks off a weekend of great craic for Irish and English supporters alike. The Stuart Mangan Cup  is contested in memory of the late Stuart Mangan who was injured while playing rugby in 2008. The friendly competition between the old Irish and English greats is testament to Stuart and aims to highlight and raise much needed funds for injured players.

The 2014 event will raise funds for the RFU Injured Players’ Foundation, RESTART and the IRFU Charitable Trust.

The Legends series continues to tempt some of the greatest retired players to put their boots back on, face up to old rivals and raise invaluable funds for their team’s nominated charities.

Validus Re have again offered their generous sponsorship of the teams for this event. The England Legends team will be led by former captain and British & Irish Lion Martin Corry.

Corry will be joined by several members of the England 2003 World Cup-winning squad including former Harlequins players Jason Leonard and Andy Gomarsall.

The visiting side will be led by former Ireland hooker and British & Irish Lion Shane Byrne. He will be joined on the pitch by some Irish rugby greats, including full-back Geordan Murphy who only retired from professional rugby last summer. Murphy, who won 72 caps for Ireland and now coaches at Leicester, said: “I’m looking forward to my first Legends game, although I feel a bit of a ‘new boy’ to be a legend! “The English boys had better watch out – we have a great Irish team and will be looking to hold on to the Stuart Mangan Cup that Ireland won in Dublin last year.

“I’m especially glad to be playing in this particular Legends game to raise money for the rugby charities in honour of a fellow countryman’s name.” 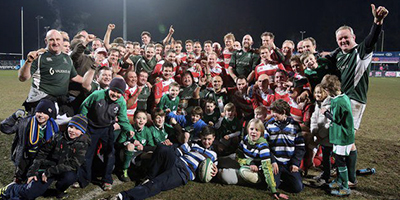